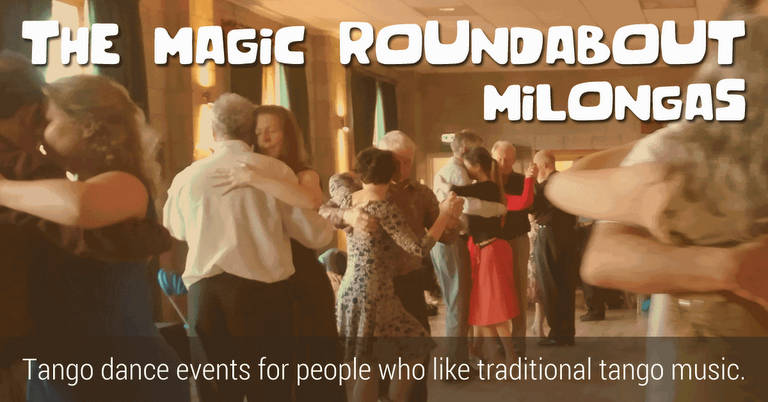 In 2018 I am looking forward to teach the FREE Tango Practica before the Sunday Service Milongas in Lydney and to DJ on different occasions too!

If you enjoy dancing to music from the Golden Age of Tango in a friendly, relaxed atmosphere, then you will like The Magic Roundabout Milongas.

We believe that the details make a difference to your dance experience. We have sprung wooden dance floors, excellent sound, cabeceo friendly lighting, experienced DJs, free tea and coffee and free parking.

The MR Milongas in Kington Langley

This is a lovely hall, approximately 20m x 9m, with sprung wooden floor said to be one of the best dance floors in the area. It has a separate shoe changing area where you can leave coats and outside shoes and a kitchen area where you can help yourselves to hot and cold drinks and light refreshments.

The nearest train station is Chippenham, 2.5 miles from the venue. A taxi ride is about £8 each way.

The hall has a car park for 30 cars at the rear.

The MR Milongas in Lydney

The Magic Roundabout Milongas in Lydney: The Sunday Service Milongas & FREE Practica are organised monthly at Watney Hall in the Forest of Dean.

The event space has a great dance floor and it’s own bar where you can order drinks. There is a bar menu including toasted sandwiches and cakes.

The nearest train station is Lydney which is approximately 1 mile from the venue.

Scroll back to top